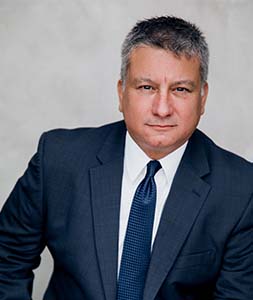 Cesar R. Garcia is a senior trial/litigation paralegal with Chang | Klein LLP. Mr. Garcia has over twenty-nine years of experience in handling large document, multi-party multi-million litigation matters, including large and complex personal injury, wrongful death, auto accident, product defects, and class action cases on behalf of injured individuals and consumers. In addition to being assigned to some of the firm’s largest cases and handling client and court relations, retaining experts, and the preparation of documents, discovery, motions, memoranda, and correspondence, Mr. Garcia is the designated trial paralegal for many of the firm’s most important cases. In this role, he has mastered the use of technology, both in and out of the courtroom, and uses the most up-to-date applications, ranging from cloud-based file storage to the use of TrialPad, TranscriptPad and DocuReviewPad, and even using AppleTV to display exhibits through the use of an iPad. Moreover, Mr. Garcia serves as a trainer for new hire paralegals with Chang | Klein LLP.

– Sheth, et al. v. Schneider National Carriers, Inc., et al.: (May-June, 2012) Mr. Garcia was trial paralegal to attorneys Brian Panish and Thomas A. Schultz. The Sheths were passengers in a vehicle when they were struck by a big rig and crashed into a median causing severe spinal injuries to Mrs. Sheth. A Riverside County Superior Court jury awarded the Sheths $36,482,302.56. Schneider National offered the Sheths $250,000 before trial. The verdict is believed to be the largest personal injury verdict in Riverside County history.

– Cuthbertson v. LACMTA, et al.: (June-July, 2011) Mr. Garcia was trial paralegal to attorneys Brian Panish and Deborah Chang. A jury ordered the Los Angeles County Metropolitan Transportation Authority to pay Mary Cuthbertson $17 million for the January 28, 2009 death of her 48-year-old son, Cameron Cuthbertson. Mr. Cuthbertson, who was visually impaired, mistook the gap between Blue Line rail cars for a door, fell between the cars and was crushed
when the train began to move. The verdict is the largest verdict in Los Angeles for the death of an adult son, and was a 2012 nominee for the CAOC’s Consumer Attorney of the Year Award.

– Solorio v. Lincoln Composites, Inc.: (Settled March 18, 2014): First case involving the rupture of two Type 4 CNG vessels installed in a van, resulting in severe injuries to three employees, including amputation of a leg and a traumatic brain injury. The case won the 2014 CAOC’s Consumer Attorney of the Year Award.