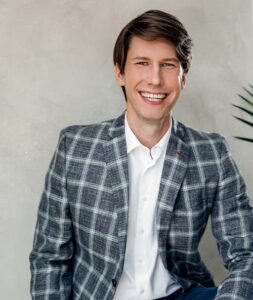 Patrick Gunning is a trial attorney who exclusively represents victims in catastrophic injury and wrongful death cases.  With a razor-sharp intellect and keen eye for the decisive details of every case, Patrick thrives in high-stakes trials and excels in finding creative ways to win.

As a result, Patrick has recovered more than $250 million for clients and consistently been on the front lines of cases with large verdicts and impactful settlements, including:

For this work, Patrick has been consistently recognized as a Rising Star by Super Lawyers from 2013 to the present.  Only 2.5% of the lawyers in California are selected to receive this honor.  He was included in the “Up-and-Coming 100” list of the elite Rising Stars for Southern California in both 2020 and 2021.  In 2020, he was a finalist for the Consumer Attorneys of California (CAOC) Consumer Attorney of the Year.

Outside of law, Patrick is also an accomplished musician, playing folk and traditional music on instruments including guitar, fiddle, mandolin and cittern.  This love of music has taken him on many adventures and to stages, festivals, and gatherings around the world.

When not immersed in law or music, Patrick can be found enjoying woodworking and construction projects.  He brings this background – the practicality and discipline of a craftsman, and the creativity and improvisation of an artist – to every case and cause.

Patrick is licensed in the states of California, Washington, and Oregon.